3/10/16-Washington D.C.- The U.S. Paralympics and IPC hosted leaders in disability advocates for a round table discussion and panel. The subject of the talks was how sport has a positive impact on unemployment amongst disabled people.

From www.Paralympic.org:  “Several of the US’s leading disability advocates attended the meeting which was hosted by the IPC and US Paralympics.
A woman with brown hair and glasses speaks to an audience and holds a piece of paper featuring a graphic to illustrate a point. Judith Heumann, Special Advisor for International Disability Rights, Bureau of Democracy, Human Rights and Labour, US Department of State, addresses the IPC/USOC roundtable discussion in Washington© •
Listen to this page using ReadSpeaker
The IPC and US Paralympics hosted several leading US disability advocates at a roundtable discussion in Washington DC, the USA, on Wednesday (9 March) to talk about improving employment opportunities for people with a disability.

To kick-off the three-hour panel, Judith Heumann gave a broad perspective on disability rights in the US, covering both historical and current challenges and opportunities, whilst Jennifer Sheehy talked about US employment rates, barriers and interventions for people with a disability.

Three-time Paralympian and seven-time medallist Cheri Blauwet then presented results from a pilot study which revealed that people with a spinal cord injury are 2.4 times more likely to be in employment if they participate in organised sport.

Sir Philip Craven revealed data from a joint IPC/U.S. Paralympics research study into attitudes towards disability and employment in the US. The research revealed:

– One in three Americans think a person with a disability would not be able to do their job.

– 39 per cent believe an employee with a physical disability would get paid less compared to other employees doing the same job, and worrying one in nine people believe less payment would be justified.

Finally, Dan Brooke spoke at length about how the London 2012 Paralympics Games not only transformed attitudes towards people with an impairment in Great Britain but were the broadcaster’s finest hour, changing the way they operated as a socially inclusive business.

Sir Philip Craven said: “The roundtable event was part of our strategy to raise awareness in the US of the transformational effect of the Paralympic Movement ahead of the Rio 2016 Paralympic Games and I would like to thank all those who attended Wednesday’s roundtable discussion.

“There was lots of excellent dialogue involving several leading disability advocates in the US. I think everyone in the room, especially after hearing from Channel 4’s inspirational Dan Brooke, fully understood the role Paralympic sport can play in transforming attitudes and contributing to a more equitable society for all.””

Only 3 months since opening its doors, the United Spinal Association garnered attention from New Mobility Magazine which ran a feature article on our new chapter! Read more about Virginia’s foremost resource for SCI/D here!

Participants included 20 peer and family mentor candidates, from across the state, with the max for each of the one day sessions being 10. Many additional community partners were represented, as well, in order to gain knowledge of the comprehensive mentoring USAofVa mentors will be able to offer their clients.

The class was conducted by Lindsey Elliot MSW, of the United Spinal Association’s national office. Participants were given a myriad of tools to help them be the most effective and professional mentors they can be.

With an estimated 250 individuals sustaining SCI’s each year, in Virginia, the Peer Mentoring program will be key to helping those new injuries navigate their rehabilitation and healing.

USAofVa would like to extend a HUGE ‘Thank You’ to those who volunteered their time and engaged in very productive learning sessions, and committed themselves to further serving future SCI’s in their communities!

If you would like to get information about becoming a mentor by joining an upcoming training session, or know someone who could benefit from a peer mentor relationship, please click here! 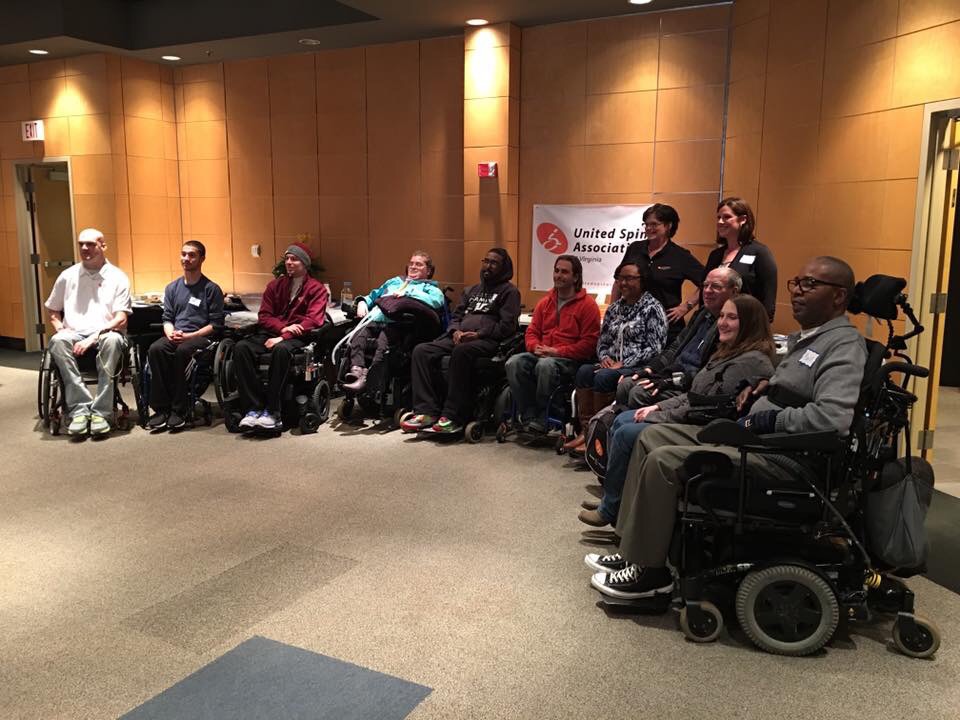 Josh Smith is the founder of Handizap and a 2013 Mechanical Engineering graduate from Virginia Polytechnic Institute and State University. In August 2014, while visiting Virginia Beach, Josh dove into a wave and struck a sandbar, causing a burst fracture of his C-5 vertebrate – resulting in him becoming a C-6 quadriplegic. While in physical rehabilitation, Josh was given assistive technology to help him use his electronic devices; however, these devices required continued assistance to use. As a solution to this problem, Josh developed a ring stylus that could be worn on the pinky finger, named the 6th Digit.

In March 2015, Josh and friend Jared Rhodes founded Handizap via a Kickstarter campaign to manufacture the Sixth Digit and develop assistive technologies. Since the initial shipment in September, the Sixth Digit has been delivered to Kickstarter supporters, rehabilitation facilities, businesses, and individuals across 22 states and eight countries worldwide.

On February 5, 2016 Governor Terry McAuliffe released a statement honoring Josh and others, which reads in part,“The innovations and discoveries by these outstanding individuals and companies are essential to our work as we build a new Virginia economy,” said Governor McAuliffe. “As we continue the tradition of honoring professionals and businesses that make significant contributions to science, it is fitting that we also recognize students and individual citizens who are using STEM to make Virginia a better place.”

-To learn more about Josh’s invention and/or purchase your own, click Here!

Sheltering Arms Physical Rehabilitation Centers hosts an annual Different Strokes Golf Tournament each October, in past years at Windy Hill Golf and Sports Complex in Midlothian, Virginia. This event includes a 9 Hole Tournament and a post tournament fundraising event with the goal of purchasing a ParaGolfer as adaptive equipment for use by the golfers in their Adaptive Golf Program.

The Different Strokes Golf Tournament teams consist of one physically challenged golfer and three able bodied golfers. The tournament offers encouragement for physically challenged individuals to continue to participate in the game of golf regardless of their physical limitations. Each year Sheltering Arms Adaptive Golf Program strives to educate the community, golf professionals, and individuals with physical challenges to pursue golf as a life long leisure activity.

South African Anthony Netto was the guest of honor at this year‘s tournament. Anthony is a professional golfer who has been a wheelchair user since 2000. He still plays golf actively with the aid of the ParaGolfer. The ParaGolfer is an assistive device that is designed to allow a physically challenged individual to enjoy a variety of sports, including golf, from the standing position.  For more info contact: Valerie Newman at: 804-764-5275 or [email protected]

Wheelchair lacrosse is the biggest thing to hit adaptive sports since Quad Rugby emerged in the late seventies. Players of all ages joined for the camp and got the basics, and then got busy checking! The game is played on an indoor court that is roughly the same size as a hockey rink, and to spectators it was just as exciting as the fast-paced ice game. Players strapped on pads, helmets, mouth guards, and gloves. And boy, they needed them. The gear is essentially the same as the more common version, but the addition of wheelchairs made this version really fly.
If you’re interested in the rules of wheelchair lacrosse and want to learn more, visit www.wheelchairlacrosse.com. If you are interested in being a part of a Richmond-based team, email us at [email protected]